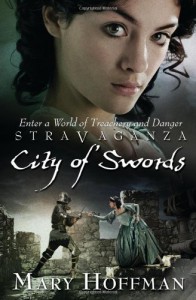 As a kid I loved the first three books of the Stravaganza series. But as I grew older I felt it wasn't really a series that grows with you when I was reading the second trilogy. It took several years to finally finish the series.

It was a super fast read, I finished it within four hours of returning home from the library (and cooked in between as well!). I've always liked the series, but was a bit wary to read this last book. All books have followed the same kind of formula, and I've grown a bit tired of it. In this book they emphasize how much everything is the same for all of them, but it made me sigh. The story was interesting as ever, there is very little which can ruin a renaissance Italy setting for me. Expect lots of intrigues (fun!) and a lot of not so subtle explaining of the intrigues (not fun).

I do think that if I was twelve years old again and reading this complete series, I would have loved it from start to finish. But as it is, I've become way more critical of my reads than I was ten years ago and also it still really has the feel of a children's book over it.