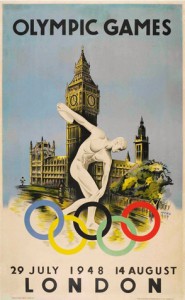 Ever after reading the first book in the Peter Grant series, Rivers of London, I've been a big fan. I don't read that many urban fantasy series, but this one is quite different from the rest I've read as it contains loads and loads of British humour, sarcasm and wit.

Needless to say I was very happy when I saw that Ben Aaronovitch had posted a short story, featuring the same main character, on his blog. Since it's still some time until (the right edition of) The Hanging Tree is published I thought this would be perfect to bridge the wait.

Set during the 2012 London Olympics it was a very nice story. It's really short, which is its only real problem. Peter is his usual self and handles the case well. I'd definitely recommend it to fans of the series. It's free and it won't take a lot of your time.

The Home Crowd Advantage is a short story in the Peter Grant/Rivers of London series. Rivers of London (Midnight Riot), Moon over Soho, Whispers Under Ground, Broken Homes and Foxglove Summer are the first five books in the series. The Hanging Tree, book six, will be published next year.