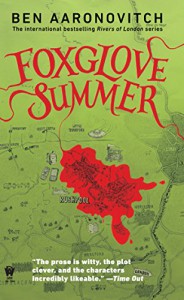 Every year, the new PC Grant novel (or Rivers of London novel as I tend to call them) is one of my most anticipated reads. Also, I need to wait for more than half a year until the right paperback edition is published (height 19,7 cm; I mean even the MMP gets published earlier!) And, while it's not like I don't have anything else to read, the long wait is killing me every time.

Onto the book. I was quite surprised to find Peter leaving London, especially after all his comments on the world ending when leaving London and there being not much out there. However, in the end, I didn't miss London too much (although I hope the next book will be filled with the usual very nice descriptions of London again). I did miss the Folly, which's completely absent from this novel. I'd not thought I'd miss Molly's cooking, but it being left out completely together with Nightingale's altogether quirkiness only made me long for the next book more.

Not that the new side characters were not amusing. I couldn't help but the constable from the city in between all the village folks reminded me at times of Hot Fuzz (which is an awesome movie btw). Beverley Brook is the only one of the normal cast to come help Peter, and for once I wasn't annoyed by her presence and she was in fact more likeable than in the other books.

It felt like the story was better fitted to the one story line and this made it feel less all over the place (although, the carnivorous unicorns were a bit weird). There were some hints to the larger, series spanning plot line, but the main focus was clearly on this missing persons case, which made it a very decent read. The ending was perhaps a bit rushed but it left a lot less questions than with Broken Homes.

One of my favourites of this series.

Foxglove Summer is the fifth book in the PC Grant series. The other books (which I also reviewed) are Rivers of London/Midnight Riot, Moon over Soho, Whispers Under Ground and Broken Homes.