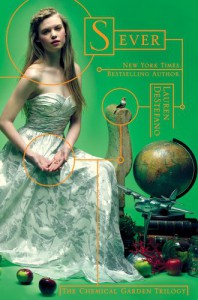 Sever is the third and final part of the Chemical Garden trilogy, you can also read my reviews of the first books: Wither and Fever.

I'm not a fan of the cover, once again in this series. The model and the attributes look like they are photo-shopped onto the ugly green background. And the colour scheme with green and gold is something I would never choose either.

I'd read the first two books, and although they read really fast and everything I wasn't overwhelmed by the story. But, I wanted to read the final book so I could finish this series, and I'm always giving books the benefit of the doubt. Perhaps the ending will take away some of the flaws. Well, did it?

Unfortunately not. The books starts so incredibly slow. Rhine sets out to safe her brother, but how is not important apparently. They make it seem like she's in a hurry, but she spends the half of the book not saving her brother. Instead she just does things, I guess. She must do something, probably, but I can't recall what (and I read it only yesterday). There is a lot of unnecessary talking. Then there's a lot of convenience for the main characters and an unsatisfying ending. It was such an easy, unconvincing ending. But that's not all.

Just the other day I complained about a sexist book. This book tries to one up the last one, by apparently stating that 'men have superior genes' (whatever that is supposed to mean? Is it a completely different species now?). It's also said that men have a better immune system, which is biologically incorrect as well. It's suggested that women have a better immune system, giving cause to the greater longevity of women and also the higher rates of auto immune diseases among women (as an auto immune disease is like an over active immune system). I never like it when they try to mess with science, but I seriously don't get why (especially as a female writer) you would like to down the whole sex by claiming they have weaker genes/cells. It's ridiculous. (I also suspected a mention that Rhine and her brother were identical twins, which would be another ridiculous statement).

Rowan, Rhine's brother might just be the most hypocritical person I've read about.

Screaming everywhere that the research is bad and it should be stopped, but at the same time making sure he's getting the experimental treatment.

These books were fast reads, and I'm glad I finished another series, but this series has quite some flaws, and the answers given are not always (mostly not) satisfying (at least for me). I don't think I will pick up another series by Lauren DeStefano.