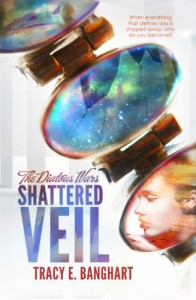 Shattered Veil is the first book in the Diatous Wars series.

This book wasn't for me, although I really like (YA) dystopian novels, I thought this world to be illogical and sexist to a level it really started to annoy me.

Meet Aris Haan, the best pilot in town, but she's stuck in her village. She's supposed to be Selected in a section (is this Divergent?) just as a military pilot approaches her and offers her a job in the army, which is strange as women in this sexist society aren't allowed in the army. Officially because they fear the human race might extinct (so, sending all males to war will make sense; although I've to admit it's more logical than sending all women), but it's obvious it's really just because they think women can save. Just sit there and look pretty. Her long time love Calix is about to Promise to her ( a commitment made before marriage), but then gets selected to Military instead of Mender (MD) and she goes looking for him by giving up her own safety (Is this Matched I'm reading?).

The world is a weird one. As in, I've read the book but I don't know a lot about it. It's says a large part of the planet is destroyed, OK, and now there are some countries. The names chosen for the countries are very easy. Safara is the bad guy, a barren land (possibly a desert), Aris is from Atalanta (not sure this is after Atlanta or Atlantis) and there is a country called 'Ruslana' (It's not before I wrote this that I realised that in English this is less obvious; but Russia in Dutch is called Rusland which makes the transition to Ruslana very easy). Exactly how these countries interact with each other, I'm haven't figured out. Except that there's a war going on.

The start was very slow, it took me some time to get into this story. When I finally got some reading done, I felt like I was reading a mash-up between Divergent (including combat training, factions) and Matched (the whole Promise-thing, her going after Calix in a war zone, pretending she's someone else). Only Aris is disguised as a man, using some very new technique called a diatous veil. This will make her features look male and changes her voice as well. The technique is so sophisticated it can easily break down or be identified if someone touches you. Yes, it's absolutely flawless.

The ending was so obvious I had seen it coming the whole book. Needless to say, I wasn't surprised. The only thing that slightly surprised me was the solution of the love triangle, but I was still annoyed by the mere existence of one so I couldn't really care. It's the start of a new series, but I won't be continuing.