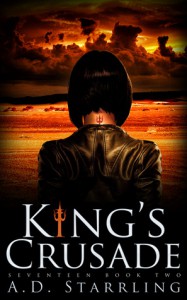 King's Crusade is the second book in the Seventeen series.

I recently read and reviewed Soul Meaning, the first book in the Seventeen series, and quite enjoyed it. So when this title came up on Netgalley as well, I was very pleased and requested it straight away. And though this book takes place in the same world (the same two races of 'immortals') it's a completely different book than the first... Except for the gunfire/fighting, there's still plenty of that...

For one, the characters are different. This books is about Alexa King, an important Crovir, whereas the first book focused on the half-blood Bastian-Crovir-hybrid (snowflake) Lucas Soul. Not that Alexa isn't special of course. Three hundred years and she still has to suffer her first dead.

The point is that the Immortals aren't truly immortal (it would make a very boring war that way), but can survive up to sixteen (mostly violent deaths). Except for Lucas, who can kill immortals immediately 'when he feels like it'. Oh, and there has been a great plague, similar to the Black Death, that killed a lot of the immortals and you'll be reminded about this every thirty pages or so.

This book basically reads like a Dan Brown novel (the fantasy-aspect, which isn't really big anyway, only starts at the end of the story) which is good, I guess, if you like that kind of story, but for me it was a little disappointment. When you've read one, you've kind of read them all. Please let me take you to some of the evidence on display:

The evidence is quite strong here. It's the main reason why I liked this book less than the first one. But also because I was hoping to find answers for the questions I still had after the first book, and that weren't in this book either. The third book is also on my to-read-soon-list, so that review will be coming up somewhere in the next month I think...