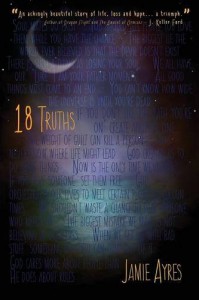 I received a free copy from Curiosity Quills Press via Netgalley in exchange for an honest review.

I really liked the cover, that made me decide I wanted to read the book. I didn't know it was the second book in a series, but I didn't feel like I missed a lot by not reading it before 18 truths (of course, I missed all Olga's 18 things, but it didn't seem that important).

Olga has just found out she's dead, to make things worse: she's been dead for the last year and has ever since reside in a place in the Underworld called Limbo. This also means that everything she did during the last 12 months wasn't real (including her 18 things). Olga and her (also dead) boyfriend Nate decide to become spirit guides, who trick other people like themselves in 'living' in Limbo.

But, now she knows she's dead, Olga wants to find the boy she's been secretly in love with for the last 12 years, who's - you guessed it - also dead (but not in Limbo).

Overall, I liked the story., at times there was nice wit and humour. It felt a bit like Percy Jackson but with Christian Mythology (angels, demons etc) instead of Greek Mythology. I thought the whole Underworld setting was original and interesting. But, what I didn't like was that the book felt, at times, very preachy. The book kept telling me how you won't be able to enter Heaven unless you believe in God, and there is a lot of mentioning when it's really not necessary, like:

Speaking of I.Q; Olga's supposed to be super smart, with a photographic memory and all. Such a shame she apparently wasn't interested in European Literature, because reading Faust would have really helped her during the story =)

An extra course in logic could have helped as well. She's afraid they're going to kill someone, but - I hate to be the one to break the news to you - he's been death for the last 13 months, he'll be OK. And how are you supposed to do a lobotomy on a spirit?!

Then there's the (in YA almost omnipresent) love triangle. The characters apparently didn't see it coming, well, I did. Why does there always have to be a love triangle? Why?

You could keep the coffee, but I'd definitively want the unlimited book supply!