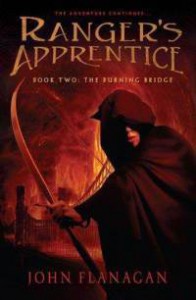 This is the second book in the Ranger's Apprentice series by John Flanagan, and takes place some months after The Ruins of Gorlan.

I enjoyed this book, the start is a bit slower than in the first book, but after they meet Evanlyn, the story really starts. Again there's a fight against big bad evil Morgarath and his Wargals to save Araluen You would say this is thrilling enough, but at the end there is just this enormous cliffhanger! Really, I think this is one of the biggest cliffhangers I've ever seen. It makes you just have to start reading the third book immediately, because you'll have to know how the story continues! (Smart move of John Flanagan, even though I don't like massive cliffhangers between books). I really liked to see Gilan in this book. He's my favourite character so far!