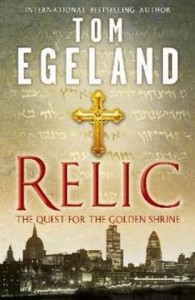 This book is described as The Norwegian Da-Vinci Code, but as it appears this book was written first, should it not be that The Da-Vinci Code is the American Relic?

In the crazy around this type of book after the hype of the Da-Vinci Code, this was one of the books that found it's way into the Dutch bookshops. It sounded interesting enough, so I took it with me.

It's an enjoyable read, although not really that original. I know it was written before the hype started, but I can't loose the feeling that it's like a checklist has been used while writing this book. It was nice to read though, the Norwegian setting is something different and I liked it. This also is the first book in the Bjørn Beltø series, and actually I'm curious to find out what happens next...