1000 Years Of Annoying The French 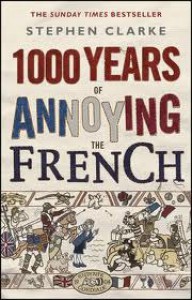 Could anything be more fun?

Someone wrote in their review for 1000 years of annoying the French that you don't need to be British or hate the French in order to like this book. I totally agree. I enjoyed it, being Dutch, because I also always like the way British and French people mock each other.

Besides, it's also a great history lesson. I like to read about history, and this book gives an overview of French-British history since 1066. That was a nice refresher for me, as I hadn't really remembered everything about it. (But then, it's not my national history of course). From that point on is shows histories about Canada and the to-be-USA, champagne, many a French-Anglo war, the French Revolution, Napoleon, and at last the Eurostar train between England and France. I think I learned quite a lot during this read, I found it interesting as well, as the writing style is mocking both the French and the Brits.