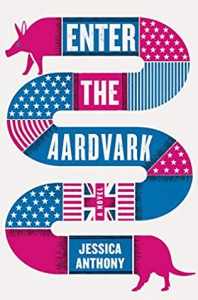 Aardvark is one of those few words where it is painfully clear the word has Dutch origins, translates to earth-pig but on doing a quick search I learned the aardvark is in fact a close relative to the elephant. And when you stop to think of it, it does make sense on a level: big ears and an interesting snout.

However, back to Enter the Aardvark, a novel with two POVs which both star the said stuffed aardvark as well as a closeted gay man. Their lives couldn’t be more different, one in the spotlight as a congressman preparing for re-election, the other a reclusive taxidermist. As you have probably guessed they have more in common than just the aardvark and their sexual preferences.

Part of the narrative is in second person, which is something I always need to get used to again, but I find it intriguing at the same time. New however, was the extreme unlikableness of the ‘you’ main character, whose hiding behind snarky remarks and neurotically mentioning the price of everything he gets in contact with.

It is a satire of the American political system where success can turn in the blink of an eye. As such, it works. But the ending, the solving of the mystery of the aardvark I thought was a bit absurd and left me a little disappointed.