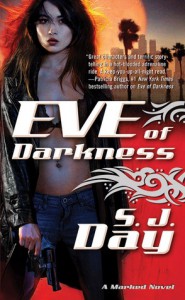 Let me explain why I picked up a book I never thought I would like in the first place. Recently, I've been trying to broaden my reading by joining book clubs and reading out of my comfort zone. Tor.com has a monthly book club which I've been following for the last year or so, and for February they came up with Eve of Darkness.

At around 20% I seriously considered giving up on the book. I wanted to give it a fair chance, but every idea I had about the book before the start (it being a book by Sylvia Day/SJ Day - although I never before read one of her books) was confirmed three times over. There had been several (bad) sex scenes - one of which possibly a rape -, the main character slut-shaming herself, and being labeled a sinner for 'having tempted an angel into making her lose her virginity'. What however had been lacking so far, besides taste, was a single thread of a plot.

However, I'm not one for quitting books. I want to see whether there is some redeeming qualities somewhere, even though it would probably be better to quit, because there is so much left in the world to read. Admittedly, the remainder of this book was not as bad as the first 20%, but still it turned into the most generic good vs evil plot with both Cain and Abel (from Bible fame) fighting over Eve (Don't get me started).

Perhaps surprisingly, I don't plan to continue the series.