The Ten Thousand Doors Of January 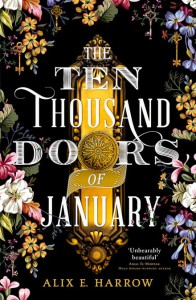 The Ten Thousand Doors of January has a title that immediately made me want to read it. However, this always unnerves me a little bit, because I'm afraid I will be disappointed by a book that I'm looking forward to reading so much. I got it in an end of year sale, and planned to read it in January, as the title suggested, but in the end ended up finishing it just in February.

Luckily I didn't need to worry, because once I started reading I knew it was going to be a good one. Immediately I was drawn to January and her Doors (and other capitalized words). I don't want to say too much about the story, for fear of taking some of the magic away. But I will admit I recommended this book already to people, while I was only half-way the book, even to those who normally steer clear from Fantasy.

What I didn't know at that point though, was that it would touch me as much as it did. Definitely recommended and three euros very well spend.