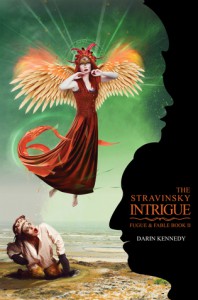 I read The Mussorgski Riddle some time ago, and I enjoyed its unique style and story, so I was looking forward to The Stravinsky Intrigue although I had to admit that the details from the first book had become a bit fuzzy and I'm not really acquainted with the ballets from Stravinsky that play a major role in this book.

At times I was a little bit disappointed with The Stravinsky Intrigue. While the story resembled The Mussorgski Riddle, there were some things that annoyed me (that I don't recall from the first book). There are many coincidences, and Mira jumps into danger at almost any possibility. The rest of the time she's defending her psychic-ship in a condescending manner which I disliked. Also, the story seemed rather finished at the ending, but since I know there's a third novel coming, probably everything will be resolved (taking any suspense there was about the main characters).

What I did like, as in the first novel, was all the music. It is a nice introduction to the music, and I would certainly recommend to listen to it while reading. I enjoyed that a lot. The story is also moving forward rather quickly, and there's a mystery to be solved (before it's too late).

Not as good as the first one, but I'm still curious as to how it's going to end.