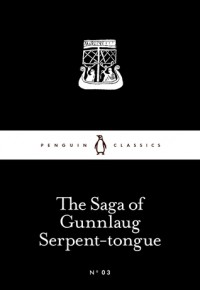 The Saga of Gunnlaug Serpent-Tongue is the third of Penguin's Little Black Classics, and it is because of titles like this one that I picked up the series, as they represent the kind of books I would maybe not have read otherwise.

The story was quite enjoyable. A young Icelandic noble holds a gap-year (several in fact) traveling to the courts of Europe, where they all love his poetry and shower him with gifts. When he eventually returns he finds that a fellow poet has sneakily stolen his betrothed and he's not pleased with this at all.

While the story is easy to follow it wasn't always an easy read. Because of it being a saga there is a lot of attention for everyone's father and their father and their fathers before them (you get the idea). This combined with the feeling that there were rather a lot repetitive senses made that the flow wasn't really that nice and makes that I wouldn't quickly pick up a full length work of Icelandic sagas. But I think it works quite well in small doses.