A Trail Through Time 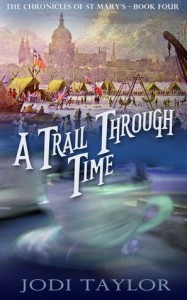 A Trail Through Time starts off right where A Second Chance ended and basically this is the moment where the aforementioned second chance really comes into play. Leon and Max are on the run and hunted through time and space (though maybe just through time). As they jump up and down the timeline, a new threat becomes more and more clear. And it is not just Leon and Max who are threatened by it.

I was a little bit sceptic at the beginning of A Trail Through Time. I didn’t particularly care for the whole

change of dimensions kind of thing, because it seems like an easy way to create fake suspense. I mean, ‘oops, if Leon or Max are killed again, we jump right into another dimension and all will be well’

I didn’t really care for some of the changes that were made in this novel, although in hind side, after having read the whole series (up to now), I see why Taylor had to so (or it would have been impossible to explain the absence of the Time Police in the first three books.

As is the case with more things in the series, that sometimes feel a bit forgotten or too rushed into a conclusion, I still haven’t figured out exactly what Mrs. Partridge’s plan is exactly. Besides these minor points it was just plain old entertainment. I enjoyed it a lot and I can not stress it enough. The characters are gold. I had never expected I would say this about a time travel series, but the characters really make the series. They feel as old friends already.