Dawn Of The Vie 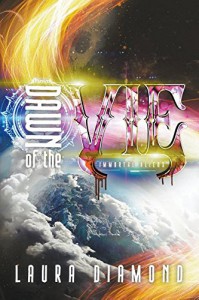 Dawn of the Vie features a future is which the Earth is invaded by a predator Alien species that closely resembles vampires. They are in each and every sense superior to humans and even immortal, although I suppose they age as there are whole families of them. Vie and humans both despise the Anemies, people with a hereditary form of anemia, which makes them unsuitable for feeding.

Alex, a high-standing Vie scientist, has found a use for their blood after all. Apparently it is a powerful drug. How this is supposed to work is never explained, although I do hope the author realizes that anemia means that something, like red blood cells, is lowered in the blood instead of something added.

This story had a lot of the usual suspects thrown into it. Some of them are, a truly unfair societal setting, the main character is just trying to protect his younger sibling and soon finds himself in the center of the enemy. Sounds familiar? Indeed, because it has all been done before. That's why I was a bit surprised that I still liked the book as much as I did. I found it to be precisely the kind of Dystopian story I was looking for at the moment.

I would not consider it the best, but it is one of the good ones, and if you want to enjoy yourself for a couple of hours, I would recommend it.