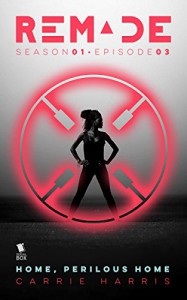 I'm starting to see a certain rhythm in this serial. So far, each episode focuses on a single of the teens and the reason why they died. Episode three specifically focuses on Naveah, who had previously died from cancer, and seems to be the only one to be very glad to be alive.

The rest of them are just trying to find a new way to live, where ever it is they are now. But foraging for food proves more difficult than previously thought. And more dangers are lurking in the shadows.

So far, I've found the episodes entertaining, but no more special than any number of YA dystopian stories I've already read. The advantage of all of them having previously died or in what kind of world they currently are remains unanswered, but will probably not be solved before the end of the first season, episode 15. Until then, I will read on.