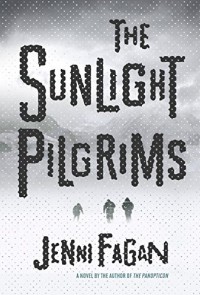 I was expecting the next apocalyptic story, where the world slowly freezes over the period of a long and freakish winter. While this is indeed a part of the story, to me it felt in the end as the minor part. Sure, there's talk about how cold it is and people are freezing to death in the streets (apparently, it takes a week to thaw a fully grown men, although why they would thaw them and then hold mass-cremations beats me).

Instead this is the story of the people living in a Scottish caravan park. The are all troubled and the cold really is the least of their problems. There is a sense that life wasn't good there before the start of the cold. Also, they never stop talking about the huge iceberg. However, while there's talk about some more drastic apocalyptic things, they aren't shown in the novel.

I found The Sunlight Pilgrims to be very slow, and while I don't need action packed sequences, it felt too much like all the characters were stuck where they were, unable to change anything and resigned in their fate. It was rather depressing. I'm sure tons of people are going to like it a lot, because it is written beautifully, but for me it was not the right book at this time. Or rather it was the wrong book for this time.

Also, on a much lighter note: It felt a little bit strange to read about a monster winter in the middle of summer (even though it's only 18 C these days).