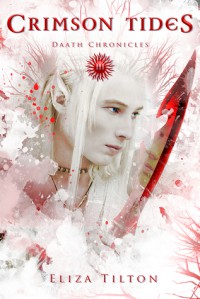 Crimson Tides concludes the story of Daath, where reptilian like aliens have made plans to take over the world as their own planet is dying. I would recommend not to start reading this novel until you've read the rest of the series, as the action starts right from the first page.

While I think it was a nice conclusion to the series, the same things that bothered me during the earlier books where also here. I didn't like all the characters, and at times it was really quite unrealistic (yes, I'm saying this about a book with an alien as one of the main characters). However, I had not anticipated the shock I would feel at the death of some of the characters, meaning I was more invested into the story than I at first thought.

All in all, the Daath chronicles were a nice series, but not one that blew me away or that I would plan to reread.

Read my reviews for the rest of the series: