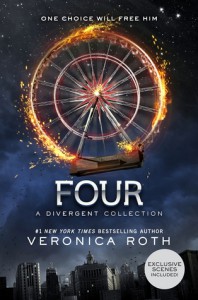 In the new tradition of trying to make more money by selling shorter 'companion' stories to (already finished) series, there is this collection: Four. Containing four (I see what you did there) stories about Four, and since I have a compulsion to finish what I started, I thought it would be a good warming up for Allegiant: Part 1 (Splitting movies is another thing I dislike).

It has been said before that it is better to show than to tell. I think that is also the case with these four stories. Most of the story in these stories was already known since I can't imagine people reading these stories without having read the Divergent series. However, these stories will throw all subtlety overboard and explain to you everything you might have missed upon reading.

Don't get me wrong. They were quite entertaining, although overlong and to me they hardly added to the reading experience of the complete series. But then I never was a very big fan of the series (except for the first book). Therefore, I think it probably works better for the megafans of Divergent or Four, or for those who just can't get enough from short companion novella's.

And before you ask: the movie hugely disappointed me. I think it's time for an YA Dystopian hiatus.