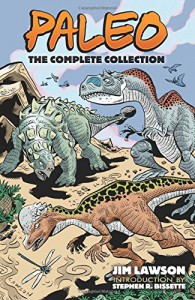 Dinosaurs! I may have mentioned before that I have a soft spot for everything involving dinosaurs and that I'm unable to resist requesting dinosaur books from Netgalley. This was one of those books.

I was unfamiliar with this series, but a comic featuring dinosaurs (and more importantly not featuring humans) sounded awesome. In addition the dinosaurs behave in a way that dinosaurs might have behaved, not some kind of anthropomorphic kind of dinosaur. While this was a great idea, in execution it lacked for me.

Because basically every story in the collection was the same. The species of dinosaur differed, but almost without exception it features stories where in the end the hunter gets hunted by some thing bigger (which in some cases gets hunted by something even bigger). It just got repetitive really quick. The art didn't wow me either. I think there are quite some people who have nostalgic feelings about this comic, and they will probably enjoy it more than I did.