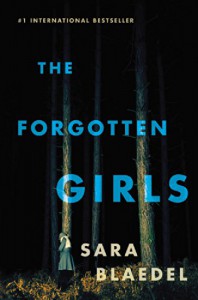 It's been a while since I last read a Scandinavian thriller, but I felt it was time for another one. I believe that even though this is the first book that is published in English, there are six earlier novels in the series. However, there were some things that made me feel this book was a fresh start (perhaps with new characters, but at least with a new team).

Louise Rick is the new head of a new division investigating missing persons cases, while apparently also working on murder cases. Her new partner, Eik, is drunk on his first day, but gradually improves into a proper detective. When a woman with a remarkable scar is found dead in a forest but no one seems to miss her, they will try to identify her and unravel the mystery that surrounds her.

At first I felt a little confused. Even though this department was just being set up, I felt that I had missed a lot of Louise's background (which is probably mentioned in the earlier books). One of the larger subplots in the story though is about her personal life, but didn't make too much sense to me and wasn't always easy to follow. Some things took ages for the detectives or any other people really to remember (like the fact there were many unsolved missing persons cases in exactly the same forest). The case is an interesting one, and the characters after a while started to grow on me, but I thought the ending wasn't that strong. I was a little bit disappointed with it. That being said, it certainly was a pageturner that I enjoyed reading. Should they translate more books, I would want to read them.