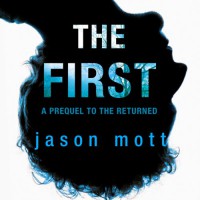 Some time ago I read The Returned which features an interesting story on how people respond when their deceased family and friends return from the dead. Not as zombies, but they just are there again. Especially that idea I found intriguing.

The First is the first of three prequel short stories that belong with that novel, featuring the story of one of the returned each. In The First the story of the very first of the Returned is told, which I thought was a nice addition to the other book. The story is rather short and I think it would have been a bit better had it been a bit longer, but I think it will make a nice introduction.