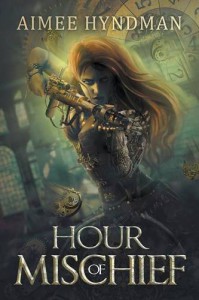 At first I wasn't too sure about this novel, and that's why it took some time for me to request the book. But I was wrong, and will admit it. It was exactly the kind of book I like, so with this I humbly apologize to Hour of Mischief.

Janet has a job gone terribly wrong and now her only chance is to make a deal with the God of Mischief, who's admittedly her God since she's a thief, but whom she has a lot of reasons not to trust. When she needs to help him stop a war with all the humans caught in the cross-fire, he might have a hidden agenda.

The best part: definitely the mythology. If you like to read books with all kinds of Gods thrown in, this is your pick. There's a lot of meddling with/between the humans, but it's more than just Greco-Roman style gods. Its focus is the so-called clockwork gods and the elder gods.

The story is entertaining to read, but it has been done before. Janet makes her tour around a bunch of the Gods for the God of Mischief, which is a great way to introduce more characters and setting. I particularly liked the library, wonderful!

However, there never was a lot of suspense because everything was just a little bit too convenient for my taste. Also, for me it is uncertain now whether or not this book belongs to a series, or that the ending is really quite open.

But please, should there come a sequel. I'd like to read it!