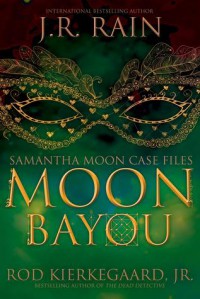 Vampire novels usually are not really my cup of tea. Time travel, however, definitely is, so I decided to give this novel a try.

Moon Bayou follows mother-of-two, vampire private detective Samantha Moon as she takes on a missing person case that will take her to New Orleans, and accidently also to the 19th century.

I've read nothing of the original Vampire for Hire series that this new series is a spin off to, but I didn't feel like that mattered much since I didn't get the idea there were a lot of things I was missing because of it. The story really has two parts, none of which were fully closed at the end of this book. I suppose the larger of the two, the one involving time travel will be taken to the next novel in this series, as the ending truly had a cliffhanger.

The vampires were quite nice, especially in their bat-like forms. There were also some werewolves, because those seem obligatory these days. Overall, the writing was very fast and easy, making this a light read. I'd liked to see some more closure though, especially on the real 'case file'. I'll have to read the next book to find out what will happen to Samantha.

Moon Bayou is the first book in the Samantha Moon Case Files, which is a spin off series from the Vampire for Hire series.