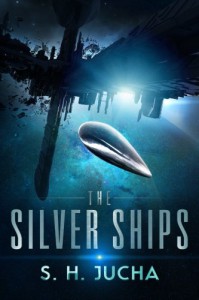 Alex has been moving asteroids with his space ship for some time when he finds an alien craft in distress and decides to make contact with it.

This was an interesting space opera, mostly in the first half though. I enjoyed the part were Alex and the AI from the other craft are together the best. Once the rest of the surviving crew was revived the story became a lot more generic. However, it did have some interesting themes. In the novel two different civilization have arisen from different space ships that fled the earth. In the time that has passed, they grown into quite distinct civilizations, making the others feel 'alien' even though they are actually human.

The silver ships referenced in the title most likely refer to some actual non-human aliens, which we'll probably encounter in the next book. While this book was far from perfect and ended exactly like one would expect, I am curious enough to read at least the second book in the series as well.