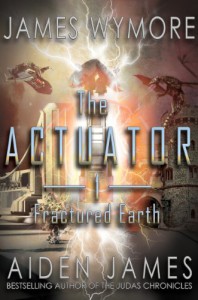 As I'm sure a lot of my bookish friends will agree with me: we have all thought at least at some point 'what if the world was more like the one in a certain book'. Well, the Actuator makes exactly that happen. The so-called Machine Monks feed the machine with their favourite genre-ideas and the Actuator makes it happen. For some reason this is highly secretive military invention (I'd say it would work wonderful in theme-parks as well). But what if security fails and 20-something Machine Monks are feeding the machine at the same time? One moment you're just a Key Hunter, the next you're battling Orcs and the base's Commander has turned into a dragon.

I liked it. It had a very fresh idea and besides, since it focuses a lot on books and genres (and the tropes as well) I didn't feel like it could go wrong. The world is fractured into a lot of different regions, which are all modelled after someone's favourite genre. So, the base is a medieval epic fantasy world but since they need to recover everyone's key (to shut down their part of the simulation) there's an almost unlimited variety of genres possible in the book. Which was something I really liked. The border are strict and everything that's taken from one region to the other morphs into something to fit the genre as best as possible.

In what other book can you find dragons, space opera, vampires, steampunk and pirates without it feeling too crowded? It was a lot of fun, even though not everything added up for me. Why isn't everyone's key just at the base? How do they know exactly what everyone's key is? Also, at a certain point during reading it started to get a bit repetitive as there seemed to be a pattern as soon as they entered a new region. But all in all, I liked it more than I expected and am looking forward to reading the next book in the series.

Fractured Earth is the first book in the Actuator series, the second book is called The Return of the Saboteur (Review to follow). There's also an anthology with short stories from the different regions called Borderlands.