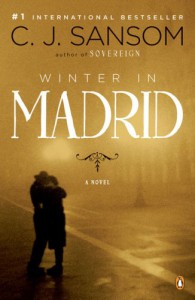 This was actually the first ebook I started when I first got my Kobo Glo. However, I didn't finish it until recently. Truth be told, I'd never made it past the 70 pages mark since I found the story slow and the Dutch translation, for lack of a better way to describe it, weird.

Set between the Spanish civil war and the second World War, the story had a great potential. A reluctant spy sent to Spain on a secret mission. It felt like the book was well researched although I'm not really a person who could say anything about that, since I don't know much about it myself.

The start was really slow, it took a lot of time for me to get at least a little bit invested in the story. There were many different characters that I couldn't really keep track of (especially after a break of more than a year). In the end, it was quite a fast read, but the story wasn't sensational and little surprising.

I think I'd expected something more like Zafon's novels, which I really liked, but this novel lacked the beautiful writing style (although it also speaks about Spain with much love). I'm not sure what portion of the clunky writing is due to the translation, but it felt unnatural at the best of times and downright weird at others. I've got another book by Samsom but luckily it's in English. I hope that will be a better reading experience...