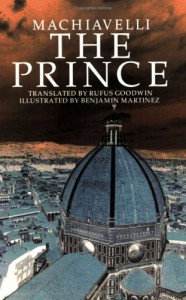 I'm probably not the best person to say something useful about this book, since I'm neither a historian nor very into politics, but as a reader, I still like to spread my thought about it. If you're looking for an in-depth analysis of the book, this review is not what you're looking for.

I decided to read The Prince quite impulsively after I started reading a somewhat weird manga adaptation of it (review to come), and I didn't understand a single thing of it. So, I decided I needed more background info, namely the original work. And in understanding the other book it certainly helped.

And it was quite a nice book to read. I'd expected it to be tougher to read, but I actually recognized many of the examples that were given in the book (who says playing games like Assassin's Creed doesn't teach you stuff?). That was interesting to read, and many of his political insights seemed legit although his advices - at least sometimes - seemed quite unethical.