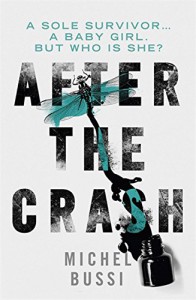 A terrible plain crash on the border between France and Switzerland kills all but one of the passengers. A young baby, merely three months old, survives. Due to an incredible there were two babies aboard the plane, born a few days apart. A battle ensues as she's claimed by the grandparents of both families, one rich and the other poor. But who is she really?

An interesting premise, I was immediately intrigued. You might be thinking: why don't they just do a DNA test to find out, but the story is set in the early 80s mostly, before the emergence of DNA testing. Partly set in 'today's world', which is more accurately the late 90s, partly told via the diary of a private investigator who spent almost 18 years on the case, it's one of those books with a dual POV that I normally can't really stand. Especially since I find it very hard to believe that people would not just skip to the end in case anything important is found there. In this novel, it has been made at least slightly more probable, for which I should give it credit.

It took me some time to figure out what was happening and to solve the mystery, but around halfway I had already a feeling what it would turn out to be. I was not wrong. It was however still interesting to read and I wanted to know whether I was right. Some extra 'suspense' that was given to the story by making it a race against the clock was unnecessary, at least in my opinion. But I still liked the novel.