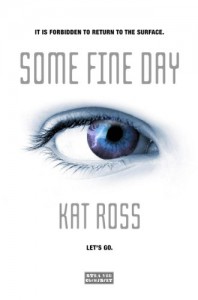 Jansin has always lived under ground. In fact, all of society has retreated there after super big hurricanes, called Hypercanes, have made life on Earth's surface impossible. Or is it? Just before finishing her long military training her parents take her on a vacation to the surface. She's thrilled to see the sun for the first time. But when the camp gets raided, her belief in the system will get tested.

It started quite promising. Jansin starts as the normal, model citizen in this Dystopian society. This is nothing new. She learns that they've been telling her lies. That's also nothing new and it wouldn't really have mattered, if it was done properly. But Jan changes her opinion quicker than you can say 'that's a cliché'. She's special. So is her new love-interest. By this time I had lost interest.

And, finally I just have to conclude that it didn't bring anything new into the story. And I do think that is important, especially right now when there are so many of these books coming out. It was not a awful read, but it was far from refreshing enough to keep me interested.