The Geography Of You And Me 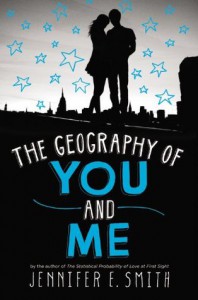 Here I'm writing a review on The Geography of You and Me...*

Somewhere else someone will (hopefully) read it...*

*More words than some of the actual chapters in this book.

There are some spoilers in this review, but there are no real surprises in the book, so I think it's fine to just go ahead...

That's one way to fill the pages, I guess. I was showing and making fun of the book when I encountered a chapter that was only half an eReader-screen long, as I don't like ultra short chapters. Things from that moment went worse very fast as I think the next 8 chapters or so became shorter and shorter until they were like this: One chapter: She breathes in, next chapter: He breathes out. Can't you just feel how connected they are right now! They're doing such special things together, like breathing (that no one thought about that earlier!)

I probably should have gone with my first thought: 'This book is not for me'. But a lot of people kept recommending this book to me and telling me just how excited they were about the book. So when I saw it on Netgalley, I requested it. And here we are... I'm just trying to say that I'm most likely not the right person for this book and chances are that you'll like it a lot more than I did.

Like Romeo & Juliet Lucy & Owen are typically star-crossed lovers. She's the socially awkward, friendless rich girl in the penthouse, he's the new guy in town who doesn't love New York City, has a recently deceased mother and lives in the basement. Can I make it any more obvious?

During a gigantic blackout that covers large parts of the United States, they meet in an elevator, and decide to do all kinds of fun stuff during the blackout like going up and down a lot of stairs multiple times just for fun. They also decide that a blackout this big (were I expect there would be chaos and very possibly looting) is a perfect time to score some free ice cream (and also that apparently the ice cream hasn't run out long before they made their way down all those stairs again). I guess nothing tastes better than free stuff. After they make their way back to the roof (more stairs!) they spend the night there, but whatever happened on that roof stays on that roof must have been terrible because they never even speak again.

Until of course Lucy finds out her parents might actually be moving to Scotland right about the same time Owen's father get sacked from his job and decides to take his son on a YOLO road trip across the States. Owen thinks the whole road trip is fine, as he already has enough credits to graduate and I'm far from an expert on the US schooling system, but why hasn't he graduated yet? I would say 'enough credits = diploma', but I no longer see why Owen would start his final year at the school he REALLY didn't want to attend when it doesn't matter anyway?

However, they then decide it's terrible they move away from each other and want to communicate with postcards. I've got nothing against the good, old postcard system, but please, if you decide to use TRANS-ATLANTIC postcards to communicate, don't you dare complain about the fact that your communication is SLOW. (They also have email but for reasons I don't get, they decide not to use that and instead stay with the postcards).

Meanwhile, these social outcasts are actually doing more than fine in their new surroundings. Both have no problem finding a new boy/girlfriend in a few weeks, and this should have been the end of it (forgive me for being a bit sceptical about long distance relationships where everyone finds a new partner in just weeks). Love-related drama strikes Lucy once again (and she moves again as well) and Lucy (with her rich parents) travels back to the States multiple times to meet up with Owen (more than she ever saw him before she moved to Scotland!).

via the most unbelievable nonsense they both end up in the same apartment building this whole story started. And they live happily ever after!

Am I supposed to think this is anything more than an easy plot device to bring the story to an end? I was glad it was over. It just wasn't a book for me.